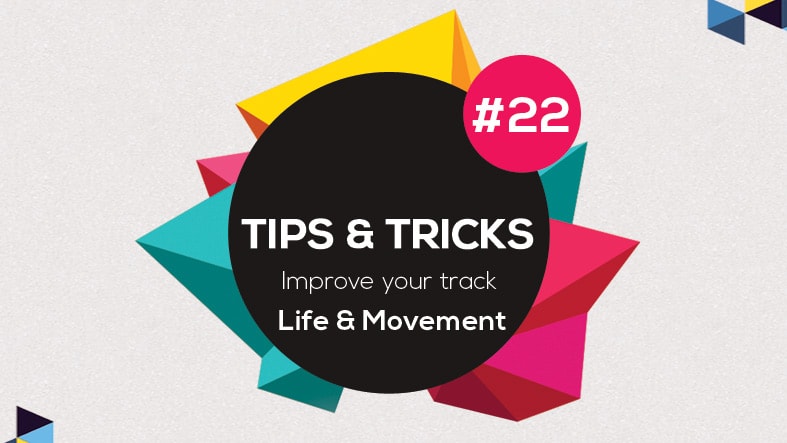 This time I want to talk a bit about how to put some ‘life’ and ‘movement’ into your tracks. That little bit of special sauce bringing a sense of depth that sparks the listeners interest subconsciously while not distracting from the main elements too much. This is probably the least technical tip that will drastically improve the sound of your productions. So; here we go…
When listening to a typical piece of music, the average listener or the starting producer will often focus on just the main elements of a track. Then, when they want to produce a similar track, they will focus on these specific elements only. In the end they will feel or hear something is missing, but can’t really pinpoint what it is exactly. The track feels ‘empty’, missing ‘life’ and ‘movement’ in the background.

What they’re often missing are the hidden treasures within these tracks. Little subtle sounds, details in the background, ambience, foley, noise, automation of certain effects on sounds. The magic elements that glue a track together and give it a sense of depth. Below I’ll talk about a few often used tricks.

This is used a lot. Think of recordings of waves crashing into a beach, a tropical storm, the winds rushing through a jungle, all mixed very subtle in the background. Fire / Water / Wind / Earth. Can be complemented with some additional reverb to create some extra space. With the EQ you can take out some of the rumble that can occur in natural recordings to avoid any clashes with your subs. In certain parts of a track they can be mixed in a little louder, think of the break of a Balearic style trance track.

For instance a schoolyard from some distance or people at the beach. The crowd of people at a train station or sports stadium. Even just a group of people singing together, making noises, clapping. Depending on what you choose you can yield different results. A group of people clapping to a rhythm will make your track sound more organic and sound more ‘real’, creating some real movement in the background. While a crowd of people cheering (such as in a stadium) can bring some extra power to a part of your song.

Foley is also similar to the previous two, but more focused at recording specific happenings. Think of a car door slamming, a whistle, glass breaking, banging on pans and pots, a group of feet stomping on the ground etc. This can be used creatively in the background or to complement your drums to create some extra movement and impact.

Many people remember the typical vinyl noise. The constant pops, cracks and hiss. Technically we’ve moved away from that with the introduction of digital recording and (re)production of music. But a lot of people miss the ‘feel’ of this, making a song sound more grounded and real. A bit dirty, but in a good way. That’s why a trick that’s used a lot is to mix in some low-level recordings of the typical vinyl playback noise / hiss / cracks & pops. Of course next to using saturation and distortion plugins on some sounds to also create that more gritty feel and bringing ‘life’ to a track.

Some high end frequency content can also create some interest. A bit of sparkle to ‘spark’ that interest. It’s an old trick, with wind chimes and the ‘glockenspiel’ being used in orchestra for many many years. Combining these metallic ringing sounds with some additional reverb can quickly create atmosphere, often associated with a ‘magical’ feel. While an airy noise creates a very pleasing ambient sound.

Automation on reverb can be a great way to glue the space between two sounds together. It can also create a sense of depth that changes throughout the track, creating movement in the background. Building up tension before a drop or making a sound just a bit more interesting in the mix. The same thing goes for delay, which can make a more playful sound that has some movements in between the notes. Or even automation of the stereo width, changing the depth of a sound.

I talked before about how a group of people clapping or stomping their feet can create movement in the background and how automation can create a sense of depth. But the same thing goes for drum loops you create yourself. With a decent amount of reverb, mixed in at a low volume, you can create a rhythm that moves the track in between the notes. Panning them can also create space in the mix. So when you main elements are focused primarily in the center region of your mix, these subtle sounds can be panned freely hard left and right (or more subtle, whatever you prefer) and create a sense of space and width.

I’ve summed up a few of the most used techniques but of course it’s up to you how you apply them. There are a lot of other tricks and sounds you can use to achieve similar results. But next time when you listen to a track, see if you can focus on the subtle details instead of the sounds that are right there ‘in-your-face’ and train yourself to identify them. And of course, don’t forget to use them in your own productions.

That’s it for now. Hope this information helps you with your tracks. Happy producing! And if you need any help, you know where to find me!