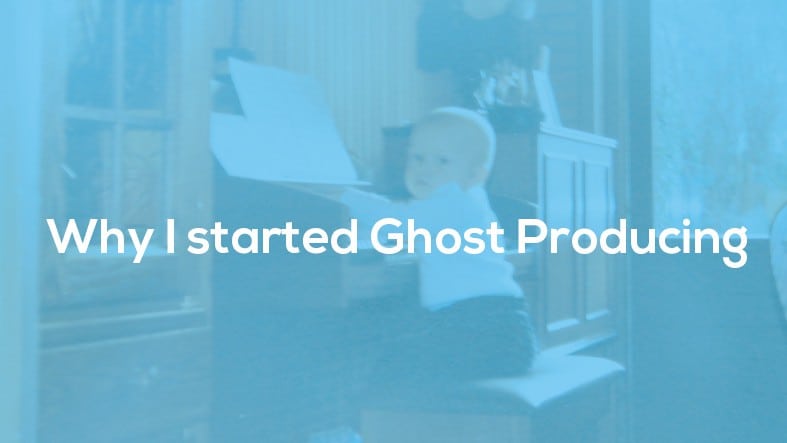 First a little introduction. My name is Michael de Kooker; producer, all-round music lover and owner of this website. I’ve decided to start this blog to show you a bit of what happens ‘behind the scenes’ at ghostproducer.net. No, no confidential information, but everyday things. Every now and then I’ll post an update about what has been going on with the ghost producers, production tips, promotional tips, insights on the music business or just random, but related, pieces.

For the first post, I think it might be a good idea to answer a few questions I get asked often.
One of the most asked questions over the last few months has been why I started ghost producing.
The answer to that, for me, is really simple: I love music production. I love the musical part of it, and I love the technical side of it. You simply never stop learning new things. Yes, I’m a geek.

I have been producing for years now, I don’t even remember when I started exactly, but it has been well over 10 years. When I started out in FastTracker 2 I had no idea what I was doing, but quickly picked it up. The possibilities back then were really limited. You were stuck with samples mostly, unless you could afford expensive pieces of hardware. I loved it though and kept producing music throughout the years. At one point or another I discovered FL Studio, and I still use that to date.

Since that time I worked really hard perfecting my skills. Mostly for myself though, I never really send out my tracks to other people. For me, my tracks were never good enough. In 2007, a friend of mine sent out a track we did together. We got a response the very next day and the track was signed a few days later. It was my first release. Suddenly a track of mine was featured on compilations around the globe, played on radio stations everywhere and picked up by the deejays.

The years after that I was mostly busy building my career in the music business. I’ve released quite a few tunes during that period and had tons of fun doing it. My tracks were supported by most of the bigger DJ’s in several genres, especially house and trance. I started deejaying myself. And I also had the opportunity of officially remixing Armin van Buuren (Perpetuous Dreamer) and Ferry Corsten & Vincent de Moor (Veracocha). The last remix (of Carte Blanche) did really well. Played around the globe, lots of airplay on the radio and even charted the Dutch national charts. This was also the turning point for me.

I noticed that everyone wanted to push me in a certain direction. Record labels wanted me to produce stuff that sounded like my other stuff, listeners/fans wanted more of the same too. And the same thing goes for the several managers / booking agencies that contacted me over the years. Everybody had plans. But I didn’t. I figured it was time to set my priorities straight.
So, when thinking about what I liked best about the music business the answer was really simple: music production. Everything else I did was simply a way to build my career so I could keep producing music and one day be able to make a living of it. The paradox though, was that the path I was going would in fact keep me away from producing. This was an eye opener for me and forced me to make a decision.

When looking for alternatives, where I could make a living doing the thing I love most, ghost production seemed like a really good idea. So 15 months ago I started with GhostProducer.net.
I have to say; it has worked out really well. I’ve been having the time of my life so far. I’ve been doing tons of different things, in different genres with totally different ideas. I’ve worked with some really amazing people: amongst others, artists on labels as Ultra, Spinnin and Armada, but also for newcomers that have the most creative ideas but not yet the technical knowhow of how to produce it. It’s challenging sometimes, but that’s what makes it fun.

And even if my name is not included on the tracklists, it’s still a great feeling seeing my tracks signed to the biggest labels, played by the top dj’s and featured on compilations worldwide. I know it was me, and that’s what counts.

Does this mean I will never make any music under my own name again? Definitely not. But for me, the fun factor in that is more important than the building of my own career. In the meantime I’ll just keep having fun producing music for others.

So, in case you were wondering why I became a ghost producer.. here is your answer. ?

This little #ghostproducer is planning something n

Training to become a lion 😍 #samspam

Our youngest Ghost Producer is looking for some fr

New toy for the studio. Making the ghost productio

Looks like Sam is enjoying his new dancing Iron Ma

Let’s face it; everyone loves a bit of disco and

Almost there with the new studio! Just the finishi

Please welcome the latest member of our Ghost Prod

Are you ready for the summer season? Because we su

Relaxing weekend away before all the "moving house